I’ve been spending more time listening to podcasts than writing about them – which is as it should be, but there’s no point me checking out new podcasts with the intention of writing about them and then never doing it. So I thought I’d just burp out what I’ve been up to. The first section is about Game of Thrones podcasts – you can skip that if you’re not into the keystone show in TV’s Golden Age.

Readers of this website might not know about your temper and how you like to storm out of rooms when things aren’t going your way. Have you ever heard anyone flounce out of their own podcast? I have!

You remember the Game of Thrones podcasts I was listening to? A Cast of Kings and A Storm of Spoilers are really good, but they weren’t enough to satisfy my cravings, so I looked into alternatives. There was a good one called Podcast Winterfell. The best thing about it was they did an ‘initial reaction’ episode. One could watch the TV show then go get that podcast and see what people were saying about it. Great. But in last week’s TV show, there was (yet another) controversial rape scene. On the initial reaction show, the host’s voice was wet with emotion, and a few days later he released an episode saying he would no longer be promoting Game of Thrones – he would not even be watching it.

Wow. It’s a shame because the podcast was good, but I admire people who take a stand. (One unique thing the host did was to point out the musical themes of each scene and explain how the music gives us a sense of place. It was genuinely insightful and enhanced my understanding and enjoyment of the show.)

Fortunately there are lots of Game of Thrones podcasts out there and they are all good – including Podcast Littlefell and Game of Thrones The Podcast (by Bald Move). The most different is The Joffrey of Podcasts. Joffrey was the most hated character in the Game of Thrones universe, but the conceit of the show is that he was the most kingly, most wise, most beloved of all. Seeing the story through that prism opens lots of opportunities for humour and fun.

The only problem with listening to so many GoT podcasts is that everyone basically says the same things, so listening to more than three is probably redundant. I’ll whittle them down based on how much I enjoy next week’s offerings. 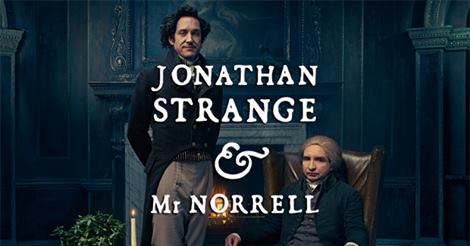 Did you ever read this book? It’s set in the 19th century and tells the tale of two magicians who try to bring magic back to England. The book was a huge hit, and the BBC are making it into a 7-part miniseries. I’ve seen the first two episodes – production values are high, the casting and acting is right on the money, and the atmosphere of stuffy weirdness is spot on. It will be aired in America in late June, I think, and the guys from the Joffrey of Podcasts are going to do a podcast about it then. Gives you time to read the book!

Gimlet, who you know as the company behind StartUp and Reply All, have a new show out. It’s called Mystery Show. In the first episode, the host tries to solve the mystery of a video shop that was business as usual one day and completely shut down the next. The host is Starlee Kine, and as you can imagine from her name, she has a voice that borders on annoying. The content was… okay. Not terrible, not great. It was the first episode so the jury’s still out on this one, but I’m willing to listen to a few more.

The good folks over at The Wrap announced details of Serial season 2 (this Autumn) and 3 (next year). Each season will follow a different case. Check out the article. I doubt either will live up to season 1, but fingers crossed.

There’s an Irish sports podcast people rave about called Second Captains. I think they are all journalists from The Irish Times and they cover football, and Irish and American sports. It’s good – there are Irish accents aplenty (swoon), they have interesting interviews, and their Corinthian love of sport is apparent. The sound quality is good, but between sections they sometimes play bits of classic sports commentary – it’s all rather random. I can’t decide if those clips are bonkers or genius. I also enjoyed The Big Interview with Graham Hunter – he interviewed Man United legend and top TV expert Gary Neville. Will it stand up with a less interesting guest? I’ll be checking out another episode or two to find out.

Someone from this show tweeted at us – the hosts are Kim Cooper and Richard Schave, who are interested in the architecture of Los Angeles. I told them I hate L.A. (long story) but would have a listen to their podcast. I put it on when I went bargain-hunting in Aldi. As expected, there were a lot of discussions about buildings I’ve never seen in places I have bad memories of. But their passion for the preservation of these buildings shines through and they are making a small (I guess) but valuable contribution to making their city a better place. Can’t complain about that! But the hosts had (and broadcast!) a super-cringeworthy argument about whether a building was under ‘obscure legal term X’ or ‘obscure legal term Y’ – if you stopped the show at that point you’d have thought they had nothing but contempt for each other. Awkward.

And Richard has an abrasive interviewing style. When he’s talking at his guests he keeps saying, ‘Now we’ll talk about the thing we agreed to talk about. You agreed to talk about it! This is what we agreed!’ And that’s before the guest has said anything. It’s like he’s worried the guest will suddenly decide he doesn’t want to be on the podcast and scuttle off. A bit odd, and off-putting. When I got to the checkout I paused the podcast and never pressed play again. Richard, if you read this, just ask your questions and let the interviewee do all the talking. Let it flow. You can add your thoughts later. But most of all, good luck with the whole preservation thing.

I wanted to love this – it has some of my favourite people in. The concept is that actors read out some of the funniest rejected movie screenplays. I listened to parts 1 and 2 of ‘Balls Out’, a movie about a repressed loser who decides to take ownership of his life by becoming a douche. The show notes call it ‘obscenely funny’. It’s not. Some bits were obscene, but not much made me laugh. Maybe one day I’ll try some other story, because I do like the basic idea, and the actors were laughing and having a good time. Maybe I just wasn’t in the right mood for it that day.

That’s enough for now. What are you listening to?