The SDR Show is a podcast about sex, drugs, and rock n’roll. (If you’re thinking it should be called The SDRR Show you are dead right.) Because I enjoy comparing things that have nothing in common (see the complaints about my Criminal vs Sword and Scale piece) I have written a short monograph comparing The SDRR Show to Seinfeld.

The SDR Show vs Seinfeld 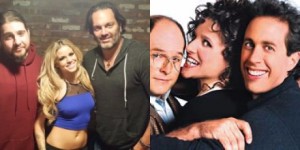 The hosts of The SDRR Show are Big Jay Oakerson (a comedian) and Rollikin’ Ralph Sutton (a radio host). They are like Jerry Seinfeld and George Costanza in that one is Jewish and has a new date every week, and the other is a sociopath whose misanthropy forms the main topic of conversation. Both shows are interesting as being totally alien to my existence (and thus potentially instructive) – I know as little about the life of a 6 foot 5 radio host in the East Village as I do about being a Latvian Orthodox convert in the Upper West Side.

Comparison with the Betrayal Episode

Did you ever watch Seinfeld? By the final series they were so confident, so sure of their own powers that they were taking all kinds of risks, experimenting with their form. An episode called ‘The Betrayal’ starts with the final credits, and from then the scenes are played in reverse order. If you want to know why Elaine has a damaged nose, if you want to know why George keeps saying his weird new catchphrase, you have to keep watching. And every revelation, naturally, contains another mystery which is explained in a later (i.e. earlier) scene.

BJO – We should have stopped her eating Skittles.

RRS – It was a train wreck. We should have taken those Skittles off her, or asked her to stop eating Skittles.

BJO – I didn’t realise how bad it was until I saw everyone on Twitter talking about Skittles.

This went on for (in my memory) twenty American minutes, to the point where I frikkin HAD to listen to the Skittles episode to see how bad it had actually been. [I listened to the rest of the Armored Saint one, but even half of that conversation was about how close Jay and Ralph had gotten to banging the Skittles chick – gah! Another reason to get the previous episode.]

Overwhelmed by all this ‘don’t listen to the previous episode’ reverse psychology, I went and got episode #42. It started like this:

BJO – We maybe should talk about the elephant in the room.

BJO – Was that the worst thing that’s ever happened in your whole career in the entertainment industry?

RRS – Yeah I think it might be. I knew it was bad but I didn’t realise how bad until I saw what people were saying on Twitter.

RRS – The real question is, who was worse, him or the chick?

Now after 20 minutes of THAT, I was so desperate to hear the previous show that I was basically unable to function as a human. The only thing that stopped me on a Christopher Nolan-style recursion to episode 1 was that they had released a new episode (#44) with two Suicide Girls. I didn’t know what a Suicide Girl was – I assumed a band like Pussy Riot – and was pleasantly surprised to find out they are a network of sexy tattooed girls who like to be sexy and get tattoos and be girls. The show was Ralph (and Jay’s one-off replacement) trying to score with two of the hottest girls in the Suicide Girl world.

The guys started out trying to do a proper interview but it got to be more and more an exercise in sustained pick-up and oneupmanship. There are episodes of Seinfeld like that. (Although now that I think about it, it was more like an episode of It’s Always Sunny in Philadelphia – the one where the gang finds a dead guy in the bar).

Neither show feels terribly bound by the conventions of their medium. Seinfeld was, famously, a show about nothing. The SeDRoRo Show treads a similar path – the hosts ignore their guests, ramble about people who have disappointed them, and talk about events they have attended that the new listener has no clue about (you have to listen to a previous episode to know what they’re referring to, but they don’t tell you which episode).

Another similarity is that the best material often comes from the side characters. The only time I really laughed while listening to this podcast was when Sal Vulcano (#45) talked about sending a blackmail letter to a woman whose pants he’d received by accident.

Anyway, since I’m listening to the episodes in reverse, I’m getting off the PC to listen to episode #41 because they spent so long saying how awful it was. I’m actually quite excited!

Holy mother! That episode 41 thing – they weren’t joking. It’s the worst garbage I’ve ever heard. Not their fault, it was ruined by this Australian woman who was stoned, drunk, and/or just damaged. I enjoyed it for a few minutes in a ‘so bad it’s good’ kind of way, but then it turned ‘so bad it’s ruining my life’, so I had to stop.