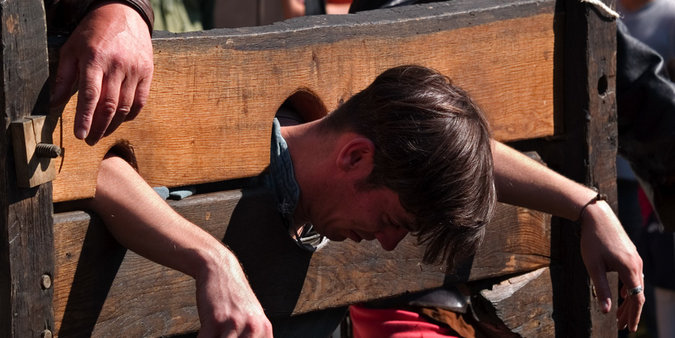 10 Years Ago: I wander into a bookshop – perhaps at an airport? – and pick out a book. I choose it the way I choose my wine – it has a nice font. It’s the 3,000 page epic ‘Jonathan Strange and Mr. Norrell’. I like it, but half the time I’m not sure I know what’s going on. There’s a sense of doom in the story that compels me to find out what happens, but when it happens I’m not really sure I understand what happened. Anyway. Really great font.

5 Months Ago: I start watching Game of Thrones almost entirely because there are so many great podcasts about it. My appetite for Westeros-themed chat insatiable, I stumble across a weird outlier of a podcast called ‘The Joffrey of Podcasts’. I instantly hate it. It is messy, confusing, and childish. But for some reason I keep going, and realise my first impression was WAY OFF. After a Saul-like epiphany I see the light- The Joffrey of Podcasts is great radio, great entertainment, and deceptively good analysis. I include a positive mention of them in a blog post about Game of Thrones podcasts. In the same post I mention that the hosts of that show plan to create a Jonathan Strange and Mr Norrell podcast. Perfect!

3 Months Ago: Since I have access to British television, I’ve long since finished watching the 7-episode run of Strange and Norrell, but eagerly await the podcast episodes from the laggardly Americans. Despite a brutal heatwave, I manage to summon up the sinew to write a mini review – it criticises the intro music but lavishes praise on everything else. The hosts’ enjoyment of the show (which I had thought would only by understandable to Brits) makes me think that maybe my Swiss girlfriend would like the TV show, and she does. Wow, I think, these Joffrey podcast guys can do no wrong.

2 and a bit Months Ago: The Lost Hope podcast series, which I’ve enjoyed so much, draws to a close. The hosts, Bubba and Catfish, invite listeners to rate their show on iTunes to enter a competition. I don’t believe for a second that BBC America will send them some swag as a prize in time for the final show, and have only ever gone through the hassle of rating a show on iTunes once before. Nevertheless, I’ve gotten so much enjoyment from Lost Hope that I leave them a five-star review that, as far as I know, will only be seen by people who search in the Swiss iTunes store for podcasts about Jonathan Strange and Mr Norrell. In other words – NO ONE IN THE ENTIRE FUTURE OF THE PLANET. But I do it. To show my appreciation.

2 and a bit Months Ago, less one week: I listen to the final podcast and, like the end to the show itself, it is bittersweet. Yes, we had some good times, some great times, but now it’s over. I sigh and smile as they give away their prizes, including the bell they used in the show to denote they were speaking in footnotes (an homage to the book). For their grand prize, they have scored a copy of an early draft of the script of episode 1. It’s basically a confidential document ripped from the jealous bosom of the BBC itself, and the writer of the screenplay – Peter Harness – will write a personalised message to the winner. ‘That would be cool!’ I think to myself. ‘But I hope I don’t win because the postage would be extortionate and I know these guys do the podcast unpaid.’ They read my name as the winner. Holy shit.

2 Months Ago: I get an email saying the script has arrived in America. Bubba will send it to me by post. ‘You’re going to love it’, he writes. What a thoughtful guy.

Five Weeks Ago: I get back from my holiday, and the script is in my mailbox. What a way to return! Even before making a cup of tea I stare in horror at the SIXTEEN DOLLAR postage fee, rip the envelope open and read the wonderfully understated, classy message from Peter Harness. Then I take it to my wintergarten and start reading. ‘This script,’ I say to my girlfriend, ‘is mind-blowingly good.’ I had suggested on Twitter that I would take a section and perform it so the world could share in the fun. I start looking for a bit that me and my fraulein could perform together. Instead, I find myself engrossed in the script. It’s simply superb. Thoroughly enjoyable in its own right. 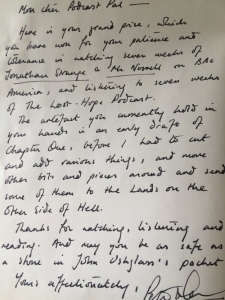 Four Weeks Ago: I still haven’t even chosen a scene to record. Other projects – like setting up hilarious websites – are getting in the way. Maybe I can use some income from my newly hatched online shop to sponsor the next Bubba and Catfish production? Anyway, before I start recording I need to find a powdered wig. Powdered wigs are not readily available in Zurich, so I become disheartened.

Three Weeks Ago: I put the script envelope in the recycling, and as I do, I realise there’s something lodged in there that I hadn’t noticed before. It’s only a frikkin Lost Hope Podcast badge! Holy bonus prize, Batman! It’s at least 15 years since I’ve had a badge. That Bubba guy is a prince among men. I’m going to write such a great tweet about all this! I put the badge on a shelf where it has a view of the Alps. My twitter passwords are all encrypted in a special file to stop the NSA favouriting tweets on my behalf and I’ve got 6 things I need to work on right away, so I decide to write a blog post about the whole thing later that week. Maybe Wednesday. 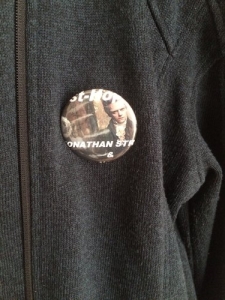 Two Weeks Ago: Of my 168 hours of being alive this week, I have two hours of spare time, which I spend re-watching the Wrath of Khan.

One Week Ago: ‘Did you remember to tweet about that script you got?’ said no-one. Although the script sits in pride of place in our ‘wintergarten’ I haven’t seen it for ages – I’ve been unusually busy and haven’t had a moment to sit down, relax, and go ‘oh yeah!’ I haven’t even sat in my comfy chair! The correct emotion is pity.

Bubba: This was a script that had to get mailed to the continental US, then get mailed back to the great state of Europe, to Switzerland and our winner Podcast Pal. Can you believe that after we mailed this script to Podcast Pal, he never tweeted anything or sent us anything saying he’d received it or saying thank you?

Catfish: What a cu-

Bubba: I spent 16 American dollars! Of my own money!

Catfish: I wanna reinforce something I may not be clear about. This guy [spoken with utter disdain, and meaning me] received a script sent around the world –

Catfish: At great expense to you… AND he received an individual letter from Peter Harness and this guy [me again] STILL didn’t bother to say thank you through a tweet or any other way? Thanks a lot Podcast PAL [said in a way that suggests we will never be pals].

They then compare my shitty behaviour with the impeccable comportment of Peter Harness, and then Catfish says he’ll never go to Switzerland until I say thanks for the script. He follows that by saying ‘screw you and your fancy jails’. (I’m pretty sure he’s thinking of Sweden – I may have inadvertently harmed the Nordic tourist industry.) Then he suggests I have no human decency, but I get that pretty often so it’s barely worth mentioning.

It’s definitely interesting to be on the receiving end of a very public rebuke for one’s behaviour. The last time this happened I was given a choice between six months in jail or joining a renegade cop on a mission to bring down a drug lord. That escapade was later turned it into a movie that flopped because the script was no good. But this Strange and Norrell script is VERY good and I was genuinely excited to receive it. The fact that I forgot to actually write down my appreciation in a mail or tweet shows a very deep flaw in my character that would take months and years of soul-searching and art therapy to fix. Much easier to simply not enter any more competitions, so I’ll go down that route instead.

So in addition to using my domain authority 13 website to rave about their show, and giving them 5-star reviews, I want to take this opportunity to show my appreciation to Bubba and Catfish for their awesomeness and generosity. Thanks, guys! Come to Sweden anytime you want!

Listen to my heroes be mean to me over here on podomatic.