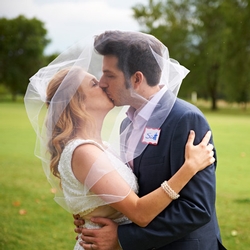 You remember I talked about that show you alone in the universe hate? The Side Hustle Show? The host was interviewed on another podcast called Radical Personal Finance. I quite enjoyed it so I thought I’d try out some other episodes.

First I tried ‘Building a Career for Yourself by Wearing a Nametag.’ It’s about this amazing entrepreneur who has worn a nametag morning and night for over 15 years. He started doing it as a joke and found that  people were more receptive to him and so he kept on keeping it on. When I did a search for a picture of him I found one that suggests he wore it during his wedding.

The episode is a good listen – the guy is productive and successful in various fields and we get an insight into his methods and processes. It’s long though – I started losing focus about halfway through. Maybe I’ve listened to too many ‘successful guys interviewing other successful guys’ podcasts recently.

I think I’d quite like to listen to some loser guy being interviewed and coached for an hour. That’d be something different. Let me know if you stumble across something like that.

Other episodes: Geo-Arbitrage, about a guy who tries to optimise his lifestyle by choosing where he lives with mathematical precision. Ideally, he says, he’d live in a no-income tax state, but close to a no-sales-tax state, so you’d earn your salary in the first and drive to the second and do your shopping there. Impractical for us since I doubt either of us has plans to move to the States, but I like hearing from people who think in these interesting ways. He goes into that topic in an international sense, too, which I thought would be thought-provoking (live in southern Germany and commute to Zurich?), but a big criteria in his eyes is living somewhere that permits gun ownership. Sigh.

Next I picked an interview with a dude called Jason who runs a blog about dividend investing. That’s where you invest in stocks that pay a high or steady dividend each year. Jason is immediately likable. He explains his theory eloquently, uses really clear imagery, and is persuasive. I liked listening to him a lot, but again, it got a bit long and I tuned about because I knew all the stuff. I’d recommend it to you though – dividend investing might be an attractive strategy.

In other news, we’ve started getting mails from people who want us to review their podcast. Expect to read about a few of those soon!

Enjoy what’s left of your holiday and remember to check out Radical Personal Finance. Here’s an episode you can try: