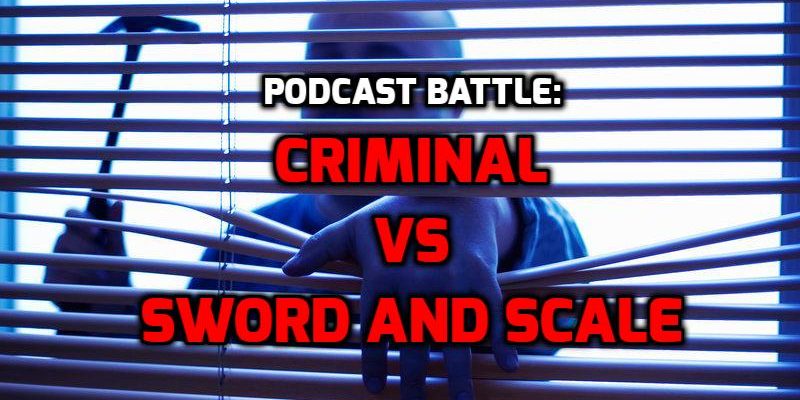 You love Rap Battles. You think every movie should have a dance-off. And you dream of a world where podcasters are dumped on an island and must create great podcasts or forfeit their lives. Well, you need dream no more, for here I bring you a Podcast Battle – what podcast insiders would call a Cast-Off. For the winners – smugness, self-satisfaction, and juice links. For the losers – our cold, cruel indifference.

I know you love the true crime genre (Serial, Truman Capote) so let’s start there, and ask ourselves:

What would happen if Criminal fought Sword and Scale?

(‘Tale of the tape’ is boxing jargon referring to the measurements/statistics of the boxers before a fight. I’m using it here as an amazingly clever pun.) 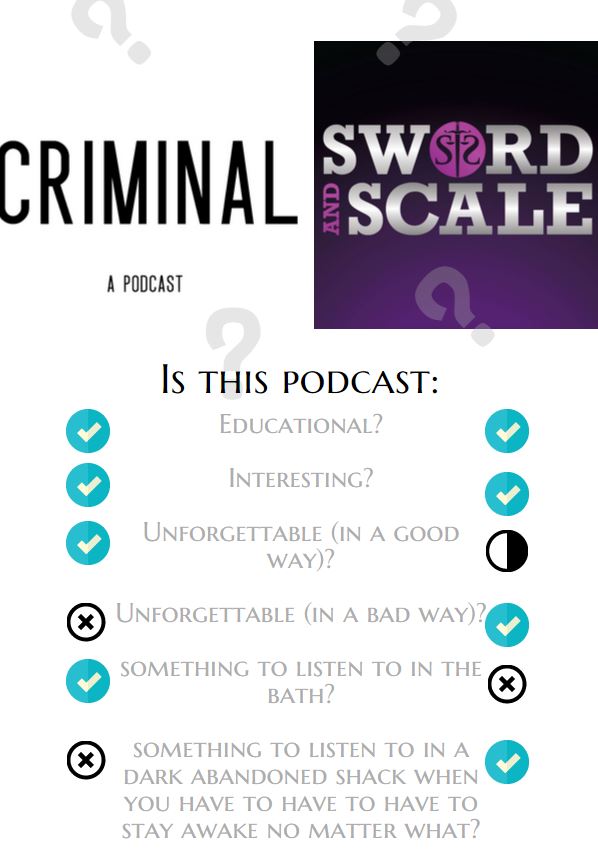 A typical episode of Criminal is 15-20 minutes long. In contrast, Sword and Scale normally runs for over an hour and sometimes stretches a story over two episodes. Both shows are relatively new – a little over a year old – but as of today there are just 17 episodes of Criminal. In about the same time, with what I guess is a much smaller budget, the dude behind Sword and Scale has made 40 shows.

There are no adverts on Sword and Scale – which seems like an advantage until you listen to the most recent couple of episodes. The host announces that he’ll only be producing two shows a month from now on because it’s too much work for not enough listeners. He pleads for people to spread the word to their friends. No adverts might be good for the listening experience, but with no income, there’s a risk of there being no show.

“Criminal is a proud member of Radiotopia from PRX” – if you listen to as many podcasts as I do, you’ll hear similar things all the time (it’s also the home of 99% Invisible and Mortified). For all I know, Radiotopia might be run by a sinister group of lizard-humans who plan to enslave us all. But there’s no denying the sound quality of the shows, their hosts have proper radio voices, and they normally have a good balance of ambient effects to voice.

Sword and Scale, as far as I can tell, is created almost entirely by one dude, Mike Boudet. The website suggests he has some help with the writing but my guess is that Boudet does all the editing, sound mixing, etc on his own. So it must sound shit, right? Nu-uh. It sounds perfect (to my untrained ears – see what Keith has to say in the comments below). It’s obviously a labour of love for the dude. The sound effects get slightly over the top sometimes, like in sensational American TV shows, but in fairness it does have sensational content. Which brings us to…

Criminal has a variety of crime-related topics – one show was about a man who ended the crimewave in his area by putting a large Buddha statue in his garden. Another was about an internet hacker who started scamming people aged 10 and eventually shut down the biggest websites in the world (all at the same time). Sword and Scale is more repetitive – some unimaginable, grisly, sickening true crime story told at length with no details spared.

Sword and Scale ranks high on a metric I am very interested in. I call it the ‘how did they get that piece of audio?’ quotient. I assume all emergency calls in the US are recorded and made publicly available, but then there are interviews with serial killers (from jail) – Youtube videos which I’m sure were taken down years ago (so how do they get the audio from them?) and so on.

It’s just so incredibly stomach-churning. I think there’s an ethical line about what content should be considered broadcastable. A serial killer talking frankly and emotionlessly about all the people he killed and how he killed them – might be close to the line, but still this side of the line. It’s horrific, and scary, but feels within the realm of ‘okay to broadcast.’ I could, theoretically, learn some of the mannerisms of a killer and spot them in my real life. A lot of the content makes me think ‘Do I know anyone who talks like that?’ If a listener to S+S made the news for turning in a murderer or preventing a mass shooting, I wouldn’t be all that surprised.

However, a bunch of the content goes way too far. Example: The legitimately distressing episode where people watch a Youtube video of a man brutally murdering someone. It’s a shame, because that was an incredible bit of radio until that point – the first 50 minutes were coruscatingly good.  I don’t think we needed to listen to those clips – a simple description of what the killer did would have given every single listener nightmares – no need to take it to its extreme.

Ugh. Just thinking about it has flooded my body with bad stress hormones. I had to watch a 7-minute ‘cats playing with babies’ video to try to relax a bit. And even then I watched it with a sense of doom, wondering which of the cats/babies was secretly a psychopath and was going to fill the screen with blood and bile. (Answer – none, it’s all cute and no-one gets hurt.)

Update – that video has been taken down, so here’s an even more relaxing one.

Sword and Scale is great. It ticks so many boxes of what makes a great podcast. It’s just if I want to recommend the show to someone, I have to apply an episode filter. For example, I could maybe suggest three of the forty episodes to my mother but instruct her in no uncertain terms to never listen to the others, ever. Other people might be able to stomach half a dozen, or ten. I’ve heard almost every episode and I honestly wish I hadn’t. (After listening to episode 40 I’m terrified of going to hospital and being defenceless against all the nurses that want to murder me.) It’s the Mike Tyson of true crime podcasts – brilliant, scary, feral.

So that makes it hard to choose Sword and Scale as the winner. Criminal is a lot more accessible (which isn’t always a good thing), it’s equally interesting, doesn’t leave you feeling sick, and I could play it with Jen in earshot. It’s the Joe Louis of heavyweight podcasts – a gentle giant who packs a punch.

So, which one are you more likely to listen to?