What is the Best Wrestling Podcast?

For lovers of wrestling, podcasts are a surprisingly fertile source of additional entertainment. If you want to catch up on the week’s events, scandals, and discussions, one of these ten is the best wrestling podcast for you and will keep you up-to-date and informed. All include interviews with stars and legends but each podcast has its own rhythm and its own special sauce. You’ll learn from professional wrestlers, skilled presenters, insightful writers and the like.

Welcome to Tights & Fights, the show that discusses wrestling with the sincerity and the hilarity that it deserves…

Danielle Radford and Mike Eagle are a dynamic duo, assisting one another with a quick wit, knowledgeable explanations. The connection between these two is warm and real. The podcast really flourishes because the hosts are so in sync and there’s such a friendly atmosphere. There’s also normally a third host, Hal Lublin, whose voice you’ll recognise from Welcome to Night Vale.

In this particular episode, a wide variety of topics were covered. In a down-the-middle, unbiased manner the duo (with guest Sarah “The Rebel” Wolfe) intensely discussed the state of women’s wrestling, all coming to the conclusion that more can be accomplished with extra time and devotion. They discussed WWE’s tag team tournament and division, being ultimately and justifiably distraught with the improper treatment of Matt Hardy & Bray Wyatt.

The conversation never lulls, flows smoothly from one topic to the next and comes packed with just the right amount of snappy jokes and excited clamoring.

It bears repeating that for the duration of the show there is never a dip in quality nor the vigor in the commentators. Time simply ticks by without notice as you enjoy a nice, neat weekly wrestling wrap up that is perfect to put on as you wind down at night or as pleasant background noise while you do your own thing.

Tights & Fights’ motto truly does capture what the hosts try to give to their audience. Sincerity and hilarity, which is so rarely done right but so excellently executed in this case. 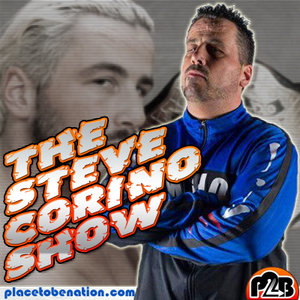 Steve is at the top after making it in the wrestling business (as a two-time heavyweight champ) and now hosting a top ranking show that many consider the best wrestling podcast. With his partner and producer Dan McGinn, they blast through current events and any topic under discussion for that particular week. In every show there is a special guest who Steve interviews as they catch up and inform viewers of the latest events. They end by reading correspondence from viewers on Twitter and responding to email questions in the most adorable manner. Don’t let him catch you calling him adorable though.

Major League Wrestling features Konnan and is released every Monday. Being a popular wrestler, he is good at taking the viewers through the week events. Konnan isn’t there for the whole show and some heavy lifting is left for the host Mister Saint Laurent. They do an array of topics and discuss staff like the scariness of Scott Steiner, Jack-in-the-Box meals and more. Konnan does not appear every week – as Mexico’s most popular Cuban wrestler slash rapper he has a lot on his plate. But keep an eye out for episodes that feature him – they’re wild.

Jim was a wrestling manager and promoter but has since retired. Some areas where he worked included his own Jim Crockett Promotions, WWE and WCW. On his podcast he is best at discussing wrestling news and speculation with his producer Alice Radley. The best part is when he engages other wrestlers in his interviews, featuring both past and present wrestlers. This show is indeed cool and you get to learn more than what you actually expected.

Vince is a former writer who mostly engaged in writing stories for WCW, TNA and WWE. He wrote some of the most famous wrestling storylines of the early 2000s. (So much so that the Russo Swerve has its own entry on Urban Dictionary.) He has continued to write and has produced two books so far. The former Champion of WCW World Heavyweight, he keeps his podcast entertaining with the kind of special guests he interviews in every show. It is hard to tell that this is a fairly new podcast. He is regarded as a straight shooter and will say it just the way it is. Get a writer’s perspective of wrestling by checking out one of Vince’s shows.

He is a famous wrestler who has won many titles, but can he host a podcast? Actually, yes. He knows wrestling inside out and his podcast is unlike any other. He calls it as it is, and uses his everyday life to explain what he means. He understands professionalism and maybe this is the reason he primarily interviews pro wrestlers. Some topics you’ll hear on this show include physical health care, which entails hardcore wresting and much more. Steve covers so much in his shows that they often end up being divided into two parts. If you want depth, try here.

The hosts in this podcast include Danny Ray, Tyler Abear and Doug Sutton. Here is where you get to catch the weekly analysis of pro wrestling TNA and WWE. Check out the wrestling greats as they go through interviews that are quite illustrative and entertaining. These greats include Diamond Dallas, Ron Simmons and the like. There are lots of hidden stories that you can unveil from WNS. Their website logo has a picture of Elvira in the background, so bonus points for that.

Here is where to find the real reports as brought to you by wrestling journalists Dave Meltzer and Bryan Alvarez. Being journalists, you get insight into the sordid underbelly of the wrestling beast. They also incorporate mixed martial arts and are at home talking about the financial aspects of the sports business. These guys offer a mix of martial arts and in depth analysis of wrestling news in an understandable way.

Get it right from Wade Keller as he moves you through the Livecast series of wrestling. A renowned publisher with thousands of articles to his resume, he knows how to approach wrestling matters from any angle. He is the man behind the famous stories in the Pro Wrestling Torch newsletters and this is what he gives live to his audience every weekday in these shows. Listeners all over the world get to ask any sort of questions and get the answers they want to hear.

As per the name, Live Audio Wrestling is a live audio where John Pollock, Dan and Jason host a weekly show to give their audience a sensation of what just happened in the ring. In 2012, Live Audio Wrestling celebrated its 15 year anniversary. That’s a crazy long time and this explains why they’re so slick and polished. If you miss a show you’ll miss a big interview. They get to interview big time wrestlers who talk about their careers and more.

The Rod Pod (off air)

Just as its title suggests, this podcast was truly engaging. Roddy Piper, who is the legendary wrestler featured here, knew how to keep his listeners fully engaged as he took them through his wrestling career. The show was unpredictable, fun, amazing, and sometimes hilarious. His interview style was refreshing and his death in July 2015 was a real shame.

Ranking: the Stars and Stripes sung by Whitney Houston

Did we miss what you consider to be the best wrestling podcast? Let us know in the comments!