This article is a simple roundup of various Star Trek podcasts. I plan to expand it over the coming months, so if you have any recommendations please leave a comment.

The HiFiSciFi Podcast (The Original Series)

Back at the start of 2016 I stumbled across what was then a new podcast. The HiFiSciFi Podcast (with Paul, Jason, and guests (normally also called Jason)) is a ‘rewatch’ podcast – they watch an episode then discuss it. I reviewed it here, but long story short, it scratched an itch I didn’t know I had.

It aims to answer the question ‘Which episodes should a new TNG fan watch, and which should they skip?’ That’s not a bad concept and gives a simple, clear purpose to their discussion. Of course, anyone interested in Star Trek enough to listen to one of these podcasts is almost certain to want to watch every episode.

To better remember the episodes they were talking about, I went out and watched every episode of Star Trek: The Next Generation but found that the HFSF guys were too slow in making new episodes (as I write they’re still on series 2). So I went out in search of new content.

Update: I found it hard listening to the second season. I don’t hate Pulaski and wish they didn’t bang that drum so hard.

That search for new content ended pretty quickly when I found the Mission Log podcast with its 200 past episodes to tuck into. The first ones were about The Original Series (TOS) so I skipped them and got stuck into their coverage of the TOS movies (Khaaaaan!). Then onto TNG.

Mission Log (Ken Ray and John Champion)  has a set formula: contact info, trivia about the episode being discussed, a plot summary (sometimes more entertaining than the actual TV show), a general discussion on whether they liked the episode and whether it holds up to a modern day rewatch, and finally they discuss morals, meanings, and messages.

That last section is intriguing. The show is part of the Roddenberry network, which I guess makes it the official podcast of Star Trek? As such they can’t just turn up and make jokes, but have to spend at least some time talking about what it all means. Sometimes that’s a stretch – there are episodes that are just action or fluff or whatever, but in most cases they make it all seem worthwhile and you remember how idealistic and humanistic the Star Trek universe really is.

The trivia section is also more fascinating than you’d expect. It’s got the normal geeky fan knowledge, but they also have access to the Roddenberry archive of documents – listen to the Will Wheaton episode for a moving use of that resource.

It’s a top show and I recommend it. The hosts have nice, soothing voices – my girlfriend lets me play the show in the evening – it helps her fall asleep.

The only downside is when they have sponsors – the adverts are ENDLESS. Like, up to FIVE MINUTES long for ONE advert. It’s seriously beyond belief. The overwhelming majority of episodes don’t have a sponsor, but still. There’s no money in the future.

I’m nearly all caught up with their back catalogue, so now I’m in the market for more.

Women at Warp (If You Unironically Use the Word Triggered)

My research suggests that most Star Trek fans are women in their mid 20s, so I thought an all-female show would be interesting. I downloaded the most recent episode, about the autobiography of Star Trek’s first female lead. 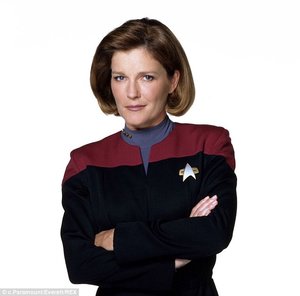 My unwell girlfriend, pottering around the flat feeling sorry for herself, came to ask me what I was doing.
“I’m listening to a feminist Star Trek podcast,” I said, pausing the app and noting the episode had been on for 9 and a half minutes. “They’ve mentioned Kate Mulgrew’s ovaries five times already.”

The sound quality is quite bad, with everyone speaking at varying volumes and levels of clarity. But the most off-putting thing (for me) is the content. Here’s an excerpt that nearly made me turn it off (though I did stick it out to the end of the episode):

‘When you really start to examine the language around (adoption) you can understand why there is this negative connotation. She gave up the baby… she gave it up for adoption… It’s like a microaggression.’

If you’re the sort of person who hears microaggressions in every thousand-year-old phrase or proverb, this is the podcast for you.

This had the best intro to any podcast I’ve ever heard – really energising music with quotes from Star Trek characters and zippy sci-fi sound effects. I was ALL IN on this one.

Sadly it couldn’t maintain that level. The host, Jordan Hoffman is a good writer and an amiable dude – but a rambly, digressive talker. Pause it after 14 minutes and write down all you heard. Then go listen to A History of the World in 100 Objects and write down what you learned. The first will be a few bullet points; the second could be a Wikipedia article.

I listened to the first three episodes, increasingly frustrated with all the fluff, then skipped to the most recent one to see if it had improved – it hadn’t. They even changed the amazing intro music to something much less fun! Terrible. Sad.

On the plus side, being the official Star Trek podcast they get good guests and might have good information about the new Star Trek series that’s supposed to start soon. But meh.

The Greatest Generation (The Funniest Choice)

Introduced as ‘A Star Trek podcast by two guys who are a bit embarrassed to have a Star Trek podcast’, The Greatest Generation (hosted by Ben Harrison and Adam Pranica) is slightly messy, slightly coarse, and very funny.

At first I was a bit put off by all the in-jokes (they call the ship the Entrepreneur, the medical bay is Six Bay, and every time Ensign Ro is mentioned they play a badass hiphop hook (just learned it’s the John Cena entrance music)). But after the third episode I found myself wanting more. They play sound clips from whatever random movie or show they’re talking about, and have oddly remixed remixes of Jean Luc Picard giving speeches. It so doesn’t work, except that it so does.

I recommend this one if you want something that treats the material as intelligently as Mission Log but is looser, more playful, and with hosts who are free to say whatever crazy shit comes into their heads. It doesn’t always hit, but they do have their moments. Here’s a sequence I liked, and should give you a taste of what to expect:

In Ep 106, one of the hosts wonders about the name of the Admiral who shows up. “Did you get the feeling that Admiral Bracket was a temp name? That actually made the show?” He dubs her ‘Admiral Lorem Ipsum’.

This leads to the following conversation:

Then they get on with the episode discussion. It might not look great written down, but it really tickled me.

It’s packed with in-jokes, so if you start with the latest episodes you’re going to be a bit lost. This guide explains them. I suggest you at least listen to episode 2, where the Drunk Shimoda is explained.

Update – having listened to quite a few episodes, I’m hooked and revising my scores.
Update 2 – Christ, this is great! I’m basically a superfan now.

I thought I’d add a bit to this article by listening to some shows dedicated to the new Star Trek TV series ‘Discovery’. While it’s obviously got a big budget and looks great, I found the first couple of episodes pretty dull. Hopefully it’ll pick up, but any podcasts that are too enthusiastic at this point turn me off a bit.

This feels very much like a copy of Mission Log – they even have a section about the meaning of the episode. What can we learn about humanity from this expensive space battle? Yeah, it doesn’t seem to be that kind of Star Trek. It’s JJ Abrams Trek, meaning shiny shiny and there for sure isn’t going to be an episode where a character spends an hour learning to play the flute.

They are too optimistic about the show. I don’t recall hearing anything negative from them which makes me wonder if they are in the pay of CBS or whatever. Also one of the hosts has a dodgy Skype connection and no-one tells him to go and fix it.

p.s. Wow, even the outro is a rip-off of Mission Log. Guys, really.

This is from the same guys who bring us the best Star Trek podcast (see Greatest Generation, above). In-jokes, funny sound effects, terrible impersonations – it’s great and funny. Throw in a boatload of empathy and an understanding of film, editing, audio, and above all what makes Star Trek Star Trek and you get this.

Um… why is the intro music so long? If I didn’t know how to use my podcast app (and Christ, Apple doesn’t make it easy), I’d almost think I’d stumbled upon some radio channel.

Anyway, the hosts are from some southern states in America (unless my accent-dar is WAY off) which for me makes it a nice change from the voices I normally hear. The name of the show hints that it’s going to be funny, but it isn’t really. The guys play it straight mostly. I quite like that some of them have very little idea about Star Trek (“Is Worf half-human?”) which means they won’t be afraid to ask and answer ‘dumb’ questions that the more geeky shows would hesitate to encompass.

Overall, I think it isn’t for me, but if the Greatest Generation crew are too childish for you, this could be an option.

It seems there are two called ‘Make It So’ – the one I found first hasn’t been updated since 2015, had poor sound quality, but could have been quite interesting. The hosts had the show playing while they talked about it, so it had a Mystery Science Theatre vibe. The other Make It So seems to be even older. The most recent one on their website is from 2007!

DO YOU LIKE STAR TREK? DO YOU TOLERATE IMPROV? THEN YOU’LL LOVE…

I listened to this one after being informed of its existence in the comments. It is exactly what it sounds like – people improvising a Star Trek script (but with an authentic-sounding musical score and sound effects). I started listening when I had a hangover and it was too manic, but checking it out just now with a clear head, I did laugh a few times. I could listen to a whole show of Sexy Admiral talking sexy at people but maybe she was only in this episode. Speaking of which, here’s the episode description for the one I listened to:

When Admiral Van Dorn comes for the Sisyphus’ insextion, the crew learns they may be too professional. Rip clogs the pipes.

I enjoyed the sub-plot with the beings of pure energy who want to be actORs.