Podcasts about TV shows are a hefty chunk of my podcast playlist, and recently I’ve been bingeing on Seinfeld podcasts. The main benefit is that even though the show was made in the 90s and it’s ages since I’ve seen them, almost every episode is vivid in my memory. You only need to say ‘George thinks his girlfriend is bulemic’ and it all comes flooding back.

So I set out to find the best Seinfeld podcast, but the three shows I’ve been listening to are fairly similar, almost interchangeable. All three are worth checking out, but if you only have time for one, I’ll list pros and cons for each.

Pros: These guys are super-geeks; they host and compete in Seinfeld quizzes. This lets them add a lot of value – saying which actors have ‘double dipped’ (appeared in multiple episodes), telling interesting anecdotes about the show’s production, dropping in trivia, etc etc.

Sound quality is good. They feed in clips from the TV show.

They also have interviews with actors who appeared on Seinfeld, notably Danny Woodburn, who played Mickey Abbott, Kramer’s friend and fellow actor. 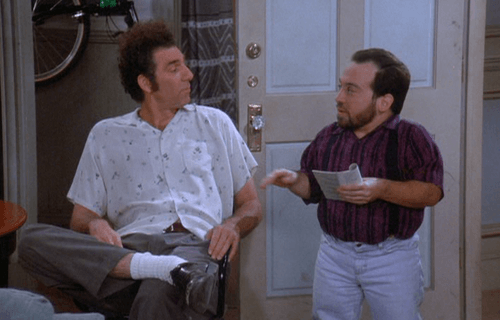 Cons: None, although I’d like it more if they did the show in the challenge format (see below).

Listen: There’s no Soundcloud link, but if you want to listen before battling the iPhone’s dreadful search page you can use the link at the end of this sentence, which takes you to their review of my all-time favourite Seinfeld episode – ‘The Opposite‘.

Hosts: Rob Cesternino (or El Nino to his friends) and Akiva Winerkur (AKA Das Wienermeister)

Concept: The format is super simple – they watch an episode and talk about it.

Pros: Generally it’s pretty good – if this was the only Seinfeld podcast I’d definitely go back to the start and listen to the whole thing. Sound quality is good and they are pretty knowledgeable about the show. But it isn’t the only one, so the flaws become more important.

Cons: That flaw is what happened after they talked about the episode called ‘The Soup’. The followed it by announcing they would do a run-down of their top 25 soups. Now, that’s pretty funny as a throwaway joke, but they actually did it! Listing soups and discussing them – it was even less entertaining than it sounds. I had to turn it off, and haven’t felt the need to go back.

Intro: Weird reconstructions of the TV show’s opening monologue or other scene

Concept: A knockout ‘bracket’ challenge – 2 episodes compete, one goes through to the next round, with the goal of finding the all-time best Seinfeld episode

This was my least favourite for the first couple of weeks. The hosts Matt and Steve previously did a Friends podcast so they should have a fair bit of podcasting experience, but there are frequent sound weirdnesses – one of the guys’s voices just disappears for a second then comes back – but at the same syllable where he left off. It’s like he’s doing thousands of tiny time jumps per hour. (They sometimes have audio issues when one is away traveling and has to call in from a hotel, but they explain it at the start of the affected episodes and so far it hasn’t bothered me.)

I like their concept a lot – they are reviewing two episodes at a time and sending the winner through to the next round. When 6 winners are in the bag, those winners compete for a place in the 3rd round. It’s a huge undertaking, and strangely compelling.

As I said, it started as my third choice but I decided to go right back to the start and so far I’ve listened to the first 37 episodes… And there’s a lot to like. Matt and Steve do almost no research but are so unapologetic about it that we don’t care – and if a listener writes in to correct them or to answer a question they are grateful. Audience participation is more than welcome – every episode they read out the latest comments from their Facebook group, and it’s interesting to track their progress over time. I remember them saying they had 14 people in their Facebook group – now there are 108. (109 in a minute – I think I’ll sign up.)

One weird thing they do in the early episodes is to read out Jerry Seinfeld’s opening monologue, complete with audience laughter and slappy bass. That’s despite one of the hosts admitting it’s too much work to edit bits of the podcast into the episode. Surely it’s more work recreating the standup than doing some cut and paste on Audacity? Their delivery of the jokes… is akin to how Newman delivers the mail. If that sounds harsh, it isn’t really meant to be. Who could match Seinfeld himself? But that’s my point – why try? [Maybe it’s not so strange – I try to recreate Roger Federer’s backhand even though I’m the worst tennis player in the world and once playing soccer I broke my collarbone trying a Ronaldo-esque spin.]

Another win is when they let their listeners call in to be a guest judge and vote on which episodes should go through to the next round. It’s quite a risk, but the first one who called in – Lem – was super chill and fit the vibe of the show pretty well. The hosts get points from me just for being willing to try and not being so protective of their content.

Doing some research I came across some reviews on Podbay. The ones who gave it a low rating didn’t like the sound quality and lack of research. My favourite is this one:

This podcast is funny, entertaining, and yada yada.

Seincast is the best Seinfeld podcast – it’s the best in almost every way. But I’ve chosen to listen to waaaay more of the Seinfeld Challenge Podcast – maybe that’s because it’s the George Costanza of podcasts – sloppy, messy, unprofessional, and lazy. Just like you, and just like me. But the format keeps you listening, too – the same way you might stick with the Da Vinci Code because you started and now you want to know how it ends.