We’ve been listening to a lot of comedy podcasts recently (God knows we could all use a laugh) and here are some of the ones that stood out. We’ve also got a section at the bottom of ones that didn’t quite tickle OUR funny bones, but might be more to your liking.

The Beef and Dairy Network

If you’ve been to Podcast Pals before, you’ll know we are obsessed with this podcast and never shut up about it. Why? Well, it’s the only podcast I’ve ever listened to that actually made my weep with laughter.

And it’s not just me – this week I got this message from my friend: 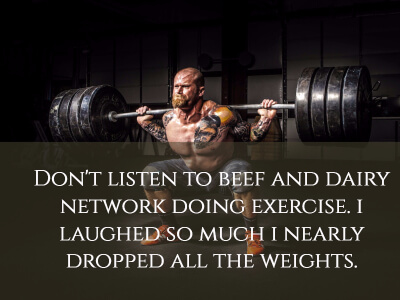 So what’s it all about? It imagines an adjacent dimension where there’s a serious podcast about beef topics and dairy news. Interviews with guests start sane and slowly become twisted laugh-mares. Listener call-ins start normal then suddenly are sprawling fantasy poems supported by a stirring musical accompaniment. And an eccentric Welshman terrorizes the farming industry while staying one step ahead of the authorities.

It is pure genius from top to bottom. The episodes can be digested in any order, but I’d advise you to start at the start so you can enjoy the development of the themes and see how the world-building sausage is made.

Bonus Points: The sheer audacity of it

Good For: Anyone interested in the production of beef herds or dairy animals; anyone who wants to learn a lot of synonyms for farm animals and related products

Many shows in this list are funny podcasts, but this is a true comedy podcast. Each episode the host (Vulture’s Jesse David Fox) encourages a comedian to dissect a joke. What was the inspiration, how was it constructed, what was the moment when it went from being a bomb to the bomb – and so on.

If you like hearing creative people talk about the process of being creative, this is right up your alley.

A good quality, humorous and clean podcast from the BBC that takes a satirical, perceptive look at the news of the day. With lighthearted discourse that still offers in depth observation, this is comedy that also informs – a definite rarity these days.

Coming from the BBC, this podcast has exemplary sound quality, and a clear, uncluttered presenting style.

Good For: Interpreting contemporary events without getting depressed by them.

A send up of the stereotype that film reviewers rarely bother to watch the films in question. Deliberately over the top humor that stops nicely short of being ridiculous.

Type of Comedy: Send up, satire

Good For: Evenings with friends and a bottle of wine

How Did This Get Made?

Another podcast we never shut up about – these guys created the ‘rip apart bad movies’ phenomenon and have perfected the art. If you’re unsure about it, go and listen to the Bloodsport episode. (Donald Trump’s favorite movie, by the way.)

If you find that live show hilarious (Kumate! Kumate!), next step is Monkey Shines (where co-host June frets over the monkeys not being credited properly) and The Room (episode 23).

Episode 20 about The Punisher is not the funniest but is one of the most fascinating episodes of ANY podcast – they have the female Oscar-winning director in the studio explaining why she made one of the maddest, most violent movies ever.

Bonus Points: June defending animal rights and not understanding basic things like ‘What is a streetfighter?’

A vehicle for Sarah Millican and other female comedians, the Standard Issue podcast combines stand up comedy with regular interviews done with a humorous approach.

The focus is primarily on issues affecting women, but the use of humor makes this accessible to sympathetically-minded men, too, and enables difficult topics to be discussed without coming across as accusatory or “preachy” (which often happens when a more straightforward approach to discussion is used).

Type of Comedy: Observational. Low-key use of humor to address sociological topics.

Good For: Evenings with the girls, self-education, awareness-raising.

On the other end of the sensitivity spectrum, we have Rocky Flintstone’s foray into writing erotica. Who is Rocky Flintstone? He’s the father of this podcast’s host (Jamie), and he’s the best worst writer you’ll ever come across.

Jamie and his friends Alice and James make fun of the writing, complain about the plot, and turn it into one of the very best podcasts going. Millions of fans tuned into what might be the highest moment in podcasting history – a cliffhanger end to a chapter that you WILL NEVER RECOVER FROM.

Bonus Points: A better cliffhanger than anything television has ever produced

Good For: Listening to on a first date

A Star Trek podcast by 2 people who are embarrassed to have a Star Trek podcast. They watch Star Trek: The Next Generation and make childish jokes while they review the episodes. It’s really dumb – they call listeners ‘viewers’ and have so many running jokes that they never explain, one viewer went out and created an entire Wiki to explain it all. IT’S REALLY GREAT.

Two guys. One explains something to the other. I listened to the Uber episode, and the two about Donald Trump. There are moments when it’s funny but also a lot that really missed the mark (for me). There’s something about the show, though. I can understand why it has a lot of fans. The moment in the Trump one when the audio engineer holds his head in his hands… we’re all with you, buddy!

Not every episode is funny, or intended to be (it’s a show about technology, particularly the internet). But they have a regular segment called Yes Yes No which is reliably hilarious.

An adult-focused podcast that discusses the lives and loves of a big city (New York), from the point of view of two working-class women of color.  This is an informative podcast, and a good way for people to engage with socially relevant issues whilst avoiding the often frenzied, somewhat abusive echo chamber of the regular social justice scene.

It’s a shame that the podcast typically opens with an appeal for funding: it would work better if this were placed at the end, if it needs to be included at all. (Some people will argue that it doesn’t, while others will point out that producing a regular podcast is work, and should be paid.)  While the podcast is casually informative, giving a broad-brushstrokes glance at issues affecting an often overlooked social group, it relies too much on shock humor, such as explicit discussions of sexual behavior, which some listeners may find off-putting.

This podcast may work better as an off-the-cuff low-key introduction to sociological issues, rather than as a comedy podcast: however, the presenters do have strong personalities that could work well in the comedy arena.

Bonus Points: Providing a platform for an underrepresented social group

Good For: Sharing on social media

Using constructed observational humor, this podcast is let down by a presenter who, rather than just being himself, has chosen to create a character, and use their observations.  Unfortunately, as often happens with this approach, the character is too over the top to be truly engaging, which forces the presenter into the use of shock tactics (profanity, and at the more extreme end of the scale) to get laughs.

While the profanity is ‘natural’, in that it is an echo of what many people would actually think in the situations discussed, some listeners may feel it is unnecessary.

Good For: Weekends with your mates, sharing on social media